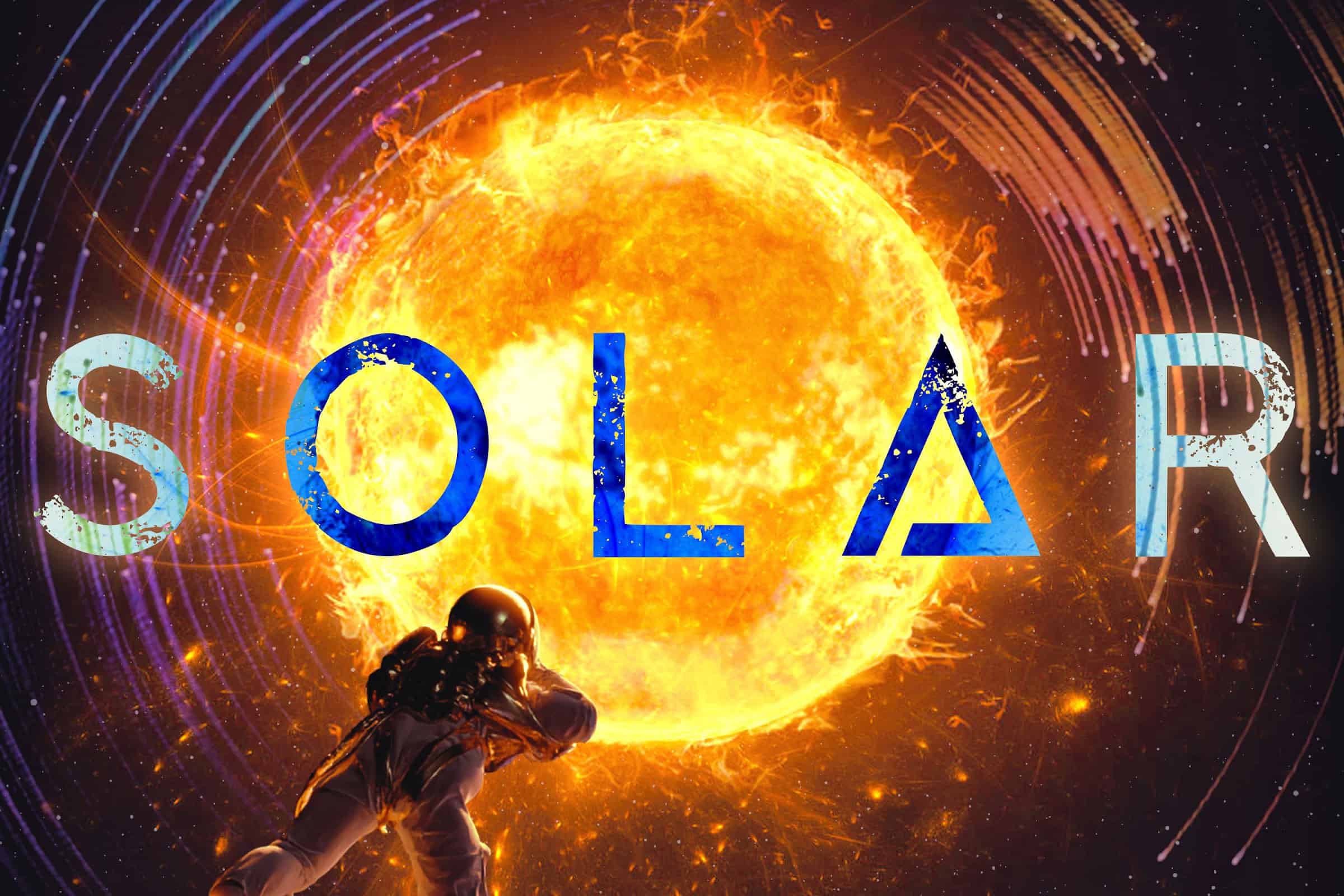 A Q&A With Jenny Curtis and Chris Porter, Creators of SOLAR

We mostly think of the night sky when we think of space – making it feel benign and maybe dream-like – fueling our aspirations to explore the depths of space. Rarely, however, do we think of the very real dangers of space travel – and the constant threat that astronauts face daily whenever they travel on a mission. The risk that even the most carefully planned discovery mission in space can go wrong at any time regardless of the crew, whom you find yourself forced to trust like no one else, also makes for pretty riveting drama in the new podcast series SOLAR by CurtCo Media – trying a new medium with cutting edge sound technology.

Silver Screen: How did the concept for SOLAR come about?

Chris Porter: I was definitely interested in science fiction via a podcast just because it’s more feasible. It wouldn’t be as labor intensive as trying to get a whole film script off the ground. I was totally wrong about that. (Laughs.) When I was blueskying it by myself, I was thinking about all the science fiction films that are about going to the far reaches of the galaxy. You know – going to Alpha Centauri, the nearest star, and other inhabitable earths. I thought it would be really interesting to do a story that was more about going to the sun and confronting the sun and from there it started evolving into this damaged spacecraft and fight for survival, and not knowing what’s going on back on Earth and it really blossomed from there. That was the initial impulse. How can we as fragile human beings present ourselves to this unfathomable source of power that we need for life to exist?

Jenny Curtis: The challenges we faced were astronomical, because we spent a year developing and when we were going into production, a pandemic hit, so we had to face how to we keep trucking forward – making it the best show it can be while also navigating through one of the most unstable times of all of our lives?

CP: It ended up becoming part of the thematic element of the story. Isolation and how can you connect when you’re unable to physically connect.

SS: What did you find the most challenging part of production?

JC: I’m not sure what I could say was the most challenging, but in any creative capacity, you always have hurdles to overcome and I’d say with this one, Chris and I worked hard to stay true to our creative vision of this story and face how do we have the best quality design and music and performances while also dealing with the nature of time constraints and opinions. Making the best product possible while juggling everything else.

CP: One of the biggest challenges was our own standards. How do we make it better?

CP: It took us about a year to write the first draft and then we had a few months where we did a workshop period and actually brought in some actors to read with us over Zoom, get their feedback and start implementing new ideas into the script. Then we went into casting, the recording phase, and post-production.

JC: So we had a year and a half of the development process. It’s been a long journey.

SS: Did anything surprise you in terms of the plot? As it was being written?

JC: Every time I got to read an episode, it was a wonderful surprise to see how Chris effortlessly weaved all these themes we’d talked about into his writing.

CP: I thought I would be tired of these characters by now with how many times we’d listened to it- this is a bit self-congratulatory, but everyone gave their heart and soul into this project and I could keep listening to it forever, and it still surprises me how much I care about it because of all these people involved.

JC: Especially all the nuances and the performance, I keep saying, I feel like these people are my friends. I love them and I learn from them every time I listen to our show.

SS: Did the cast ever get together or was it recorded separately?

JC: Everybody recorded separately, both because of the pandemic for safety reasons but also because then we have more control over how we edit the audio. We recorded at a studio in North Hollywood called ShapeUp Productions for every actor except Alan Cumming who was in New York and remotely came into the studio. This was during the pandemic, a lot of it was pre-vaccine and we had really high safety protocols. We never came in contact with each other. I was lucky enough to be in the studio with the actors, but on the other side of the glass. Chris and the other team members would be watching virtually. The way you had to come into the studio, especially at the time of recording, they get met at the door by the COVID compliance officer/engineer who’s in full COVID gear – takes their temperature and is completely masked up. We can’t give them anything to touch or have in the studio. We couldn’t print out scripts. Everything was virtual and they couldn’t touch any door handles so they were basically being let into a room and let out of a room whenever they recorded. Chris and I come from theater and I really love giving actors all the tools they need to give a great performance so we would essentially run through an entire scene to give actors the chance to emotionally go through all of the peaks and values of a scene, and I would be on the other side of the glass acting as much as I could, every other part that they were playing across so that they would have something to play off of.

CP: It’s such a dialogue driven show that it helps to give the actors that foothold to navigate the emotional twist of the scene, where if you were just recording individual lines, there wouldn’t be that context.

SS: What got you interested in the podcast as a medium?

JC: Chris and I both went to CalArt, not at the same time, but we both come from this world of exploring various mediums of art. I come from a performance background. He comes from a music background. We both met at this immersive theater company called the Speakeasy Society. I have a decade of careers in every form of production you can think of – I’ve done film and digital and TV and casting and animation and think that our artistic background kind of feeds itself into: Here’s a new place to explore, an exciting new medium for us – especially working with Chris who can hear things in a way I don’t hear things.

SS: What advantages did you think there were in releasing this as a podcast?

JC: I don’t know that I would say advantage per se, just that the way the story turned out because it is an audio medium, we wouldn’t have the soundscape that we have now. Every part of our energy went into that. We created an experience where we ignite peoples’ imaginations and it’s all done through music and sound design and performance. I don’t think that’s an advantage for the story – it’s an advantage for the listener – the people coming to experience it as a different way of taking in a story.

CP: We’re asking for a lift from the listeners’ imagination. If they get to fill in what’s happening and what they look like and what the ship looks like and that’s just a cool element of audio storytelling. The audience gets to make their own movie, so to speak.

SS: Could you talk a bit more about the technology used for SOLAR?

CP: I will say that from the get go, we wanted this to be an immersive, listening experience. You weren’t just hearing a thing, you were in the space and you would hear characters enter and leave but not in a way that would be distracting, just to make you part of what you’re hearing. So we were very lucky to get our sound designer, CJ Drumeller and he knew how to do that from a binaural standpoint but then Jenny and I decided we wanted to start mixing in Dolby Atmos so then we would be able to project it over surround sound.

JC: We did mix in Dolby Atmos, also something called DRBR. CJ creates this world of sound in a way that I could have never imagined. When we started designing the show he would say here’s where I hear this over here, here’s how I can create this space, and suddenly, while Chris wrote this into the script, it came alive because CJ with DRBR or Dolby Atmos could place for example, Allie is our ship’s AI and Chris had written temperature readings and announcements from her that are ship wide while she’s also having a conversation with characters who are in a room so there will be a full conversation being had with this AI while in the background she’s saying, “Searching for mission controls.” It just automatically brings you into this world and you can’t help but be a part of the story when you’re hearing yourself in the space, if that makes sense.

CP: To that point, what was cool about working with someone as talented as CJ who also has a little bit of musical background, I was doing the score and we would have conversations like what does this sound like? What does that sound like? You could ask me sometimes what key is the music going to be in so I don’t have the ship droning in a key that would contrast the music. So we actually crafted the music and the sound to work in tandem.